School Refusal in Children and Adolescents

In the October 15th, 2003, issue of American Family Physician, there is an article about school refusal and a handout for parents. It is interesting how a behavorial problem gets turned into a medical illness. I have always wondered about the development of compulsory education in a free and democratic society. Kids must go to school according to law and failure to comply puts the parents in jeopardy of prosecution and children in jeopardy of removal from their home by child protective authorities under the guise of "educational neglect".

This type of coercion is draconian which frightens parents and most adults who must deal with the problem so we immediately assume that something must be seriously wrong and we medicalize it to provide a socially acceptable explanation for why a youngster refuses to go to school. Of course, the article passes over the fact that over 2 million Americans are now homeschooling their kids. It strikes me that perhaps the kids and parents that have opted out of public schooling may be the healthy ones and the kids who go to school may need the medical intervention. Increasingly kids are medicated in order to function in a school setting.

The fact that some school refusal may be associated with other psychiatric problems is documented in some instances, but my clinical experience is that this is rare and that most school refusal is based on psychosocial stresses that the child is experiencing. Once these stressors are adressed most kids return to school and function acceptably. 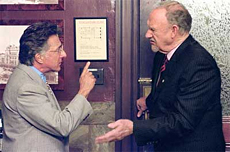 "Two years after her husband and ten others are killed in an office massacre in which the shooter also took his own life, Celeste Wood (Joanna Gong) decides on the advice of her New Orleans attorney, Wendell Rohr (Dustin Hoffman), to file a civil suit against a consortium of gun manufacturers for compensatory and emotional damages. Since there are 30,000 gun deaths and 100,000 people are disabled by gun products each year, the manufacturers know more is at stake than this one case."

Runaway Jury is a movie made from a book by the same name by John Grisham and is the story about two young people both effected by gun deaths in their lives to the extent that they try to rig a jury in a civil trial against gun manufacturers for the wrongful death of Celeste Wood's husband.

The movie is well done with a complex mystery type plot which keeps the audience guessing to the end how it will turn out. The movie portrays the court system in a very cynical way. "Rankin Fitch (Gene Hackman), a jury consultant who has made quite a fortune for himself representing firms that have become targets in the age of large suits against previously invulnerable businesses. As he reminds the gun executives, who have given him $20 million to secure a jury and swing the vote in their favor, it is but a pittance to protect the $2 billion dollars a year they make in profits. His zinger cuts them all to the quick: "Trials are too important to be left up to juries."

My fear is that the jury tampering and rigging is probably all too true.

The gun violence in the United States is outrageous, and all in the name of the second amendment which is an anachronistic idea in the current age. One wonders about the mental health of a country where its citizens feel so insecure that they need personal arms to protect themselves from what? The fact that these personal arms pose such an enormous risk to the public health in undeniable and yet the political will to rectify the situation does not seem to be there. Maybe once Charlton Heston is dead, progress could be made.

It is a good movie and worth seeing.

"If my doctor told me I only had six minutes to live, I wouldn't brood. I'd type a little faster."

Agressive pharmaceutical advertising has parents pestering health care providers for drugs to "fix" their kids. This is an alarming trend. Is there an easy fix?

There are plenty of studies that show that Primary Care Physicians are poor at diagnosing and treating depression as well as substance abuse disorders, and yet managed care companies encourage physicians to try to treat these behavioral health disorders rather than refer to behavioral health specialists because they are trying to save money. It is much quicker, easier, and cheaper to give a patient samples of an antidepressant in a 10 minute visit than it is to sit down with the patient and take a psychosocial history and mental status exam which would take an hour.

When things don't go well because the suicidal ideation was missed, and tragedy occurs, it is easy to blame the drugs and sue the pharmaceutcial companies. They, after all, are the ones with the most money.

Sorry to be cynical, but I think this warning is misleading and that the problem with teen suicide has deeper root causes and adequate treatment requires more than a warning from the FDA about antidepressant pharmaceuticals. God forbid, that we take a look at the whole way that health care is delivered in this country. It has become a mercenary business and is no longer a human service.

Radio is a sweet-natured but uneven true-life tale about the effect of a mentally challenged young man on the lives of the people in his small Southern community in the mid-‘70s. The mood is part Remember the Titans and part Rain Man, but not exactly on a par with either (especially the latter, which is a classic).

Too often, Radio director Mike Tollin manipulates the audience with an obvious paint-by-numbers approach to the story’s ripe emotions. Still, the forthright performances by Ed Harris and Cuba Gooding Jr. lend richness and integrity to what could have been an overly saccharine enterprise.

Gooding is James Robert Kennedy, but everybody calls him Radio, because he’s never far from one or more of his collection of portable transistors. Shy and simple-minded, he ambles about town, pushing a grocery cart before him. He’s very much a young boy in the body of a man. In fact, he’s the pure innocent, which is why he’s so unsettling to the folks in his small South Carolina hometown.

Harris is Harold Jones, the coach of the local high school football team. One day he happens upon several of his star players teasing and tormenting the unfortunate Radio. He has the boys run wind sprints as punishment, but he also realizes that getting to know Radio might be a positive experience for his players. So he lets the young man hang around as a part team mascot and part equipment manager.

Since he’s a lonely lad whose only regular contact is with his dedicated mother, Radio thrives with the coach and the team – though some of the players continue to torment him. They’re a little delayed in getting the film’s messages. And those messages? Don’t judge a book by his cover and trust in the importance of friendship, loyalty and decency.

But the overly excitable Radio proves to be a distraction at practice and on the sideline – and a few of the parents begin to worry that he’ll detract from their sons’ chances to win. (Since Radio is African-American and the team is white, Racism may also be at play. But that aspect is rather conveniently ignored.) Jack Garner, Rochester, NY, Democrat and Chronicle

The time depicted is back in the 70s when many of the State Schools around the country were being deinstitutionalized and there was an epidemic of NIMBY going around the country. NIMBY is "Not In My Backyard". We were trying to "mainstream" or integrate the developmentally disabled into regular society instead of segregating them into institutions. Many of us "normal" folks, especially us more liberal thinkers thought this was grand as long as we weren't inconvienced in any way. People with special needs often inconvenience us, and yet once we get past the annoyance, fear, and irritation, we find that people with special needs have gifts that enrich our lives in marvelous ways.

I highly recommend this movie. I enjoyed it a lot. I think Cuba Gooding, Jr. did a great job portraying this real life person.

"The reason that angels can fly is because they take themselves so lightly."

"When you tickle the funny bone, you massage the soul."

The Argument Culture by Deborah Tannen

"It's about how our culture is obsessed with turning every allegation into a headline, every headline into a conflict, and every conflict into a scandal. In her groundbreakign new book, communications expert Deborah Tannen takes on our national obsession with controversy and shows how we continually indulge it at the expense of real discussion -- and real solutions."

If we considered the "mental health" of our contemporary American Society and rated it on a scale of 1 - 10 what rating would you give it? How mentally healthy is our society and what would be the criteria that you would use to make such a determination?

Tannen takes a look at media, practice of law, business relationships and concludes that we live in a society that is very quick to polarize disagreements and conficts into arguments rather than enter into dialogue which is borne out of curiosity for the other point of view. Identity is born out of comparison and contrast as much as by identification and agreement, and I wonder if insecure people aren't quick to attack others to accentuate their identities in which they have little confidence.

In A Course In Miracles, we learn that attack is born out of fear. We might ask fear of what? It could be many things, but at the most elementary level it can be fear of loss of face, of loss of recognition and acknowledgement and respect. Kids, big and small, will kill other kids for "dissing" them.

In our media culture where power and status are at stake, "dissing" others seems to be the way to gain political advantage. Negative campaign adds and talk radio create an atmosphere of verbal and emotional abuse where one party seeks advantage over another by attacking the opponents integrity, intentions, performance often in unfair and biased ways which often seems to become personal.

"If it bleeds, it leads" has become a familiar slogan used in reference to media editing and it seems we have gotten to the point where if nobody is bleeding there is no story. The media is picking at scabs or puncturing people to create a story for its shock and entertainment value because it sells. We, the public, enjoy suffering and violence because it's not us that's hurting, and we can "tsk, tsk" and say "Thank God it's not me, or I'm not as bad as that".

There is something wrong with this dynamic. It doesn't seem very mentally healthy. It does not lead to happiness but rather to suffering. The antidote, the Dali Lama might say, is compassion. Compassion for others and all sentient beings leads to happiness, not tearing them apart, tearing them down, tearing into them, picking fights and arguments.

As mother used to tell us as we went out to play, "Play nice!"

Tannen's book is a little uneven , but well worth reading.

"The shortest distance between two people is laughter."
Victor Borge