"My religion is kindness." 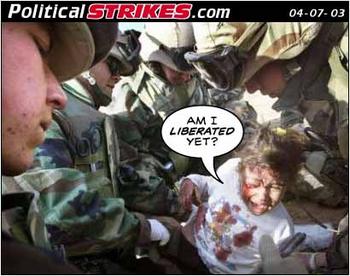 It's interesting these days how you have to go to the foreign press to find out what's really going on. Here is an article in last Sunday's Observer in Britian which says in part:

"Up to one in five of the American military personnel in Iraq will suffer from post-traumatic stress disorder, say senior forces' medical staff dealing with the psychiatric fallout of the war.

This revelation follows the disclosure last month that more than 600 US servicemen and women have been evacuated from the country for psychiatric reasons since the conflict started last March.

At least 22 US soldiers have killed themselves - a rate considered abnormally high - mostly since President George Bush declared an end to major combat on 1 May last year, These suicides have led to a high-level Department of Defence investigation, details of which will be disclosed in the next few weeks.

Although the overall suicide rate is running at an average of 13.5 per 100,000 troops, compared with a US army average of 10.5 to 11 per 100,000 in recent years, the incidence of the vast majority of suicides in the period after 1 May is statistically significant, accounting for about 7 per cent of all service deaths in Iraq."

In my generation we had the war in Viet Nam and the vets are still suffering the aftermath with PTSD symptoms, the substance abuse, the out of control emotions leading to ruined marriages, jobs, etc. "War is hell" so the saying goes, and life after war is hell too for the people who were directly effected by it and participated in it. We seem to forget this when the politicians start their saber rattling, and the patriots start waving flags and pasting them all over everything.

So in our chauvanistic fervor we send our representatives in uniform to go do our dirty work, and they pay a huge price not only on the battle field but in their hearts and minds, and we will now have another generation of tormented souls wandering among us experiencing dreams of horror night and day for the rest of their lives.

We haven't read about the suicides in the US papers or seen them portrayed on the evening news, because it is too shameful. The same is true about the psychiatric casualties that have been evacuated. And your President has cut back funding for the VA this year just when our troops will need these services the most.

I really miss Marvin Gaye who sang the anthems to sanity in the last major military fiasco in Viet Nam. "Mercy, mercy me, things aren't what they used to be. Where did all the blue skies go?"

"There is certainly more in the future now than back in 1964."

Jane E. Brody has an excellent article in Tuesday's New York Times, January 27th, 2004 about grief and counseling. It is well worth reading. Here is a snippet

"A major new "Report on Bereavement and Grief Research" prepared by the Center for the Advancement of Health concluded, "A growing body of evidence indicates that interventions with adults who are not experiencing complicated grief cannot be regarded as beneficial in terms of diminishing grief-related symptoms."

The report adds that there is very little evidence for the effectiveness of interventions like crisis teams that visit family members within hours of a loss, self-help groups that seek to foster friendships, efforts to show the bereaved ways to work through grief and a host of other therapeutic approaches believed to help the bereaved.

In fact, the studies indicate, grief counseling may sometimes make matters worse for those who lost people they loved, regardless of whether the death was traumatic or occurred after a long illness, according to Dr. John Jordan, director of the Family Loss Project in the Boston area. Such people may include the only man in a group of women, a young person in a group of older people, or someone recently bereaved in a group that includes a person still suffering intensely a year or more after the loved one's death.

Further, the research suggests, bereavement counseling is least needed in the immediate aftermath of a loss. Yet it is then that most grieving people are invited to take part in the offered services. A more appropriate time is 6 to 18 months later, if the person is still suffering intensely."

Posted at 08:33 AM in Marriage and family, Mental Health, Outcomes | Permalink | Comments (0)

"If you want children to improve, let them overhear the nice things you say about them to others."

The United States is catching up to Britain when it comes to taking a look at whether anti-depressants should be approved for prescription for teens. This is a very controversial area with little clear evidence on either side of the debate. There seems to be some evidence that a very small percentage of kids who take anti-depressants become agitated and the drugs may increase the risk of suicidal behavior. On the other hand, there is very little evidence that these drugs do any good any way.

In my own practice, I have seen no evidence that anti-depressants help patients beyond what is called the "placebo effect". That is, if the patient thinks the drugs will help, they probably will help, at least initially, whereas if the patient does not think the drugs will help, they probably won't. Only a very small percentage of patients are helped beyond the placebo effect, and so there is growing skepticism in the scientific community that these drugs do much of anything.

Of course, you can't tell the pharmaceutical companies this because they are making millions of dollars off these drugs, and physicians have loads of samples in their cupboards left by the pharmaceutical salesman to encourage their distribution and precription when the samples run out.

It is much simpler for physicians to give depressed patients anti-depressant samples than it is to talk with them for an hour about what is troubling them. HMOs discourage referrals to behavioral health providers and believe that the cheapest way to treat most patients' depression is by having the Primary Care Physician provide the patient with a pep talk and drug samples. Patients also, are always looking for the quick cure, the silver bullet, and magic key. We all are looking for that quick way to alter our mood without having to do anything to change what is troubling us. Is it any wonder that substance abuse disorders are so pervasive in our society when the answer to life's dysphoria is drugs whether legal or illegal?

I do know that some people believe that they have been significantly helped by these drugs, and I am supportive of their use of them, but then on the other hand the scientific data to support their widespread use just isn't there. And if people are dying in the process from suicide because their underlying depressions aren't being treated in psychosocial ways because prescribing antidepressants has become the first line of treatment especially in teens, then a look at our treatment approaches is certainly in order.

There is an interesting article in the February 2, 2004 issue of US News and World Report which points out that alcoholism costs business billions of dollars, and that businesses would save tons of money if they paid for treatment for their employees.

"Alcohol abuse costs American businesses an estimated $134 billion a year. People with untreated alcohol problems use twice as much sick leave as other employees. They have more on-the-job accidents. They are five times as likely to file a workers' compensation claim."

My favorite line in the movie "Traffic" was something like "When it comes to drugs everyone wants the cops to get tough on crime until it is a friend or relative of yours, then they want treatment."

There are huge social class differences between whether someone with a substance abuse disorder will get caught up in the criminal justice system or the health care system. Betty Ford, Kitty Dukakis, Rush Limbaugh, and other celebrities rarely go to jail, they go to rehab, while the lower class street punk, or the lower class clerk at Wal Mart probably is going to jail for similar offenses.

We know that for every $1.00 spent on treatment of substance abuse disorders, society saves another $7.00 on other social and health care costs.

Treatment works and deserves our support whether through governmentally funded programs or through our health care insurance.

U.S. News: Drinking problems are costing business billions. Why not pay for treatment? Bottom lines: the cost of drinking(2/2/04)

"A person reveals his character by nothing so clearly as the joke he resents."

"A study commissioned by the National Institute on Drug Abuse (NIDA) has concluded that the advertising program of the White House anti-drug office has had little impact on its primary target: America's teenagers.

Conducted jointly by the Annenberg School of Communications at the University of Pennsylvania in Philadelphia and Westat, a 30-year-old research firm in Rockville, Md., the analysis concluded that "there is little evidence of direct favorable [advertising] campaign effects on youth."

They seem to effect parents more than the kids. Perhaps the parents then have an impact on the kids so it is worth it in the long run? What do you think? 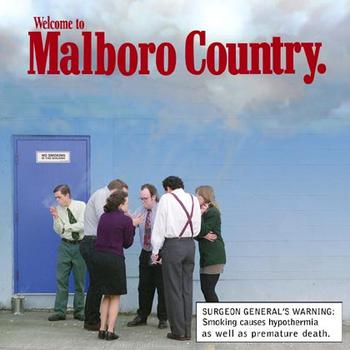 In California which has been a leader in banning smoking in public places, raising taxes on cigarettes, and anti smoking publicity campaigns the rate of smoking is only 17% which is down 6% since 1991 and is way below the national average of 25% of adults who smoke. Here, in New York, the adult smoking rate is 23%.

The impact on public health and health care costs is enormous. Deaths from smoking are about 430,000 per year in the United States as compared to the 100,000 from Alcohol, and the 30,000 from street drugs. The important thing to note is that these deaths are entirely preventable.