Yesterday, September 29, 2006 Crooks and Liars web site posted about a 2 1/2 minute video from Jon Stewart's Daily Show during which Jon discusses the President's reponse to the scandal created by the National Intelligence Estimate leaked to the press on September 26, 2006.

Bush seems angry that Americans have the information from the NIE report that the terrorist threat has gotten worse since the U.S. invaded Iraq not better as President Bush and his administration continually states in spite of the evidence to the contrary.

It makes one wonder whether the President is psychotic, psychopathic, or a dry drunk in denial. These possibilities, of course, are not mutually exclusive and so could be overlapping.

It is very destructive to our country and the world that the President would not want Americans to have information necessary in a Democracy to allow them to participate in good policy development. He seems defensive, rigid, insistent, and angry.

In dysfunctional families one of the rules is the "Don't Talk" rule which means that everyone knows that bad things are happening but no one is suppose to say anything for fear that it may upset the person in authority, usually mom or dad. One of the ways of commenting without being blamed is to make a joke or to play the clown. This gets exemplified in our national politics by satire which Jon Stewart is so good at. It is a sad thing to watch President Bush and his administration self destruct. The only thing sadder is to witness the death and destruction that has been perpetrated around the world under the guise of "freedom and democracy". It seems President Bush believes his own delusions even with evidence to the contrary.

Watch the clip by clicking on the link below. You will either laugh or cry or a little of both.

It's not just priests, now its congressmen you have to worry about

It's not just the priests you have to wonder about now its sanctimonious congressmen who are sexually harassing and possibly molesting our nation's youth. Rep. Mark Foley, a Republican from Florida, apparently resigned from congress this past week after being outed for hitting on male congressional pages under 18. To watch the ABC news report posted on Huffington Post click on this link.

The bigger scandal is that House majority leader John Boehner said, according to the Washington Post, that he had been aware of Mark Foley's problem for several months and had told House Speaker, Dennis Hastert, who did nothing about it. Sounds kind of like the Bishops covering up the priest scandal.

The Washington Post article refers to work that Foley hypocritically did in congress on Missing and Exploited children as he, apparently, was exploiting children himself. There also were rumors that he was gay which he apparently denied and we know how the Republicans have championed the Marriage Amendment to protect the nation from gay marriage.

Foley chaired the House caucus on missing and exploited children and was credited with writing the sexual-predator provisions of the Adam Walsh Child Protection and Safety Act of 2006, which Bush signed in July. A photo on the White House Web site shows Foley among those attending the signing ceremony.

In 2003, Foley faced questions about his sexual orientation as he prepared to run for Sen. Bob Graham's post. At a news conference in May of that year, he said he would not comment on rumors that he was gay. He later decided not to seek the Senate seat to care for his parents.

Of course, his being gay has nothing to do with his child abuse, but it does have a lot to do with the hypocrisy of the Republican party.

Penelope Lemov has an interesting article in the September, 2006 issue of Governing magazine outlining this finding.

Researchers looked at patient traffic in emergency rooms in 60 communities all around the country and found that ER use was relatively low in communities with higher numbers of uninsured, Hispanics or non-citizens. Instead, use was high in places with more elderly residents and patients who have to wait a long time for appointments with their own doctors, and places where a smaller percentage of the population is enrolled in HMOs. “Emergency room use is up across the population,” says Peter J. Cunningham, the report’s author, “including more middle-class folks with private insurance.”

As for Medicaid patients, they were not a factor in overuse of emergency rooms when they had access to HMOs. With managed care — at least managed care that works well — patients are part of a system that provides preventive

So it turns out that those at the lower end of the income charts are not the ones clogging up emergency departments. Instead, the report found, it’s a very different population — older, middle class and unable to gain access to care when they need it. While these patients and their insurance companies pay the bill for ER visits, that’s still money being spent on an expensive — and often unnecessary — form of care. And this, in turn, affects health insurance premiums and the cost of health coverage to employers (which includes, of course, states and localities) — an issue that is becoming politically toxic.

Addressing the financial drain and overcrowding that defines the emergency room dilemma includes the problems of the uninsured poor — they often appear in the ER when their health is so compromised that they require more extensive and expensive treatment that they can’t afford to pay for. Their needs can’t be underestimated. But a solution must also include the issue of access problems at the higher end of the scale. Overcrowding in emergency rooms is becoming a crisis — visits increased by 26 percent between 1993 and 2003 and have been climbing since then — but the dilemma is, notes Cunningham, “a manifestation of a much more systemic problem.”

The United States has fallen to 16th in the World behind Slovenia for god's sakes in high speed internet access for its citizens. What does this mean for technology and market competition in a global economy? The Neiman watchdog web site has this to say:

Through most of the 1990s, the United States led the world in high-speed connectivity. Yet according to the International Telecommunications Union (ITU), the United States, despite having the most broadband connections, has stumbled to 16th in broadband technology and continues to fall. This situation has directly harmed this country’s technology edge, and makes the U.S. a backwater compared to South Korea, Japan and even Slovenia.

"It has become a kind of Ur-narrative regarding this presidency, I suspect, because it affirms central suspicions about Bush nourished even by many who once supported him: that he's in a bubble walled off from reality; that he takes matters on faith; that he allows ideology to trample expert opinion; that he staffs the government with cronies who run it incompetently.

In other words, widespread concerns about the mistreatment of science by Bush's administration cannot be fully understood except in the context of related worries about the overselling of the Iraq war based on dubious intelligence, or about our government's pathetically inept response to Hurricane Katrina."

Torture is not mentally healthy for Americans

President Bush and congress says this is OK. Is this OK with you? 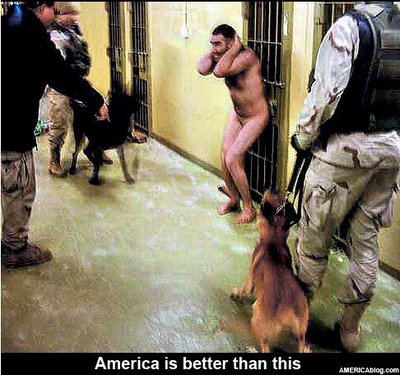 Overheard at the library

Man in his 40s: "Did you see the latest survey that 43% of Americans still think that Saddam Hussein was personally involved in 9/11?"

Second man about same age: "It's hard to believe that so many people are so stupid."

The person who writes the Indexed blog is a very clever, insightful, intelligent person. I have become a huge fan of this web site. On Tuesday, September 26, 2006, there are some great postings. As a marriage counselor, I especially enjoyed this one. Spend some time reflecting on it, it will be well worth it. 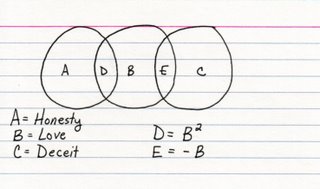 It is interesting how the current Republican administration can spend billions and billions of dollars on an immoral and pre-emptive war in Iraq and yet not provide a safety net for the health care of the children of our nation. It is the shame of the military/industrial/capitalist complex. Once again I am reminded of Tom Frank's book, What's the Matter With Kansas, in which he points out the Republican brainwashing of Americans with the idea that their real concern should be gay marriage, and flag burning rather than with the health of their children and grandhcildren.