Counter recruiting of Army of None

I work with adolescents as part of my general practice and in the last couple of months I have had 3 or 4 young people say that they are thinking about joining the military. As a therapist I am ethically bound not to let my personal values interfere with my client's right to self determination, but I want to tell them about the high rates of PTSD, substance abuse, rape, and suicide among the military.

The military trains people to kill often civilian populations which goes against our human instinct to preserve life. The United States government has been involved in my lifetime in immoral wars that the Popes and other religious leaders have declared immoral. The moral and ethical conflicts which participating in the military places young people in can be soul damaging.

Is it mentally healthy for 17, 18, 19 year old kids to sign up for the military to be trained to kill? I have my doubts. That's why so many of our soldiers are on anti-depressants and wind up with life long psychiatric disabilities. I watched my generation go through this and now a whole new generation in the Iraq and Afghanistan wars.

This article is the first in a series of articles I will  be posting on this blog categorized as "militarism".

Milton Friedman and his disciples are a bunch of charlatans when it comes to their preaching about free markets. They are only free when the plutocrats are making money. When they loose money the markets quickly become socialized by the government and the taxpayers pay. When will the voters catch on to the nonsense that comes out of Washington?

Big lie exposed - No such thing as free markets

I woke up this morning to the headline on Yahoo news that the U.S. government is going to take over two of the largest mortgage companies in the United States. So much for free markets.

Of course, the government took over Bear Sterns a couple of months ago trying to prop up the investment companies.

The Republican nonsense about free markets is peddled to the working class and poor but the upper middle class and rich know that there is no such thing as free markets. Markets are manipulated by the rich, monied class and they are in bed with the government officials to line their pockets. When their schemes don't work, the government steps in to bail them out. This is another example of capitalism out of control. Here is a snippet from the Yahoo web site:

WASHINGTON - The government is expected to take over Fannie Mae and Freddie Mac as soon as this weekend in a monumental move designed to protect the mortgage market from the failure of the two companies, which together hold or guarantee half of the nation's mortgage debt, a person briefed on the matter said Friday night.

Some of the details of the intervention, which could cost taxpayers billions, were not yet available, but are expected to include the departure of Fannie Mae CEO Daniel Mudd and Freddie Mac CEO Richard Syron, according to the source, who asked not to be named because the plan was yet to be announced.

Federal Reserve Chairman Ben Bernanke, Treasury Secretary Henry Paulson and James Lockhart, the companies' chief regulator, met Friday afternoon with the top executives from the mortgage companies and informed them of the government's plan to put the troubled companies into a conservatorship.

Posted at 08:01 AM in Back story, Baloney watch, Campaign issues 2008, Capitalism out of control, Social Policy, Society | Permalink | Comments (0)

Catherine Arnst had an interesting article published in the May 8, 2006 issue of Business Week entitled "Hey, You Don't Look So Good: As Diagnoses Of Once-Rare Illnesses Soar, Doctors Say Drugmakers Are 'Disease Mongering' To Boost Sales".

Here is a snippet from the article: 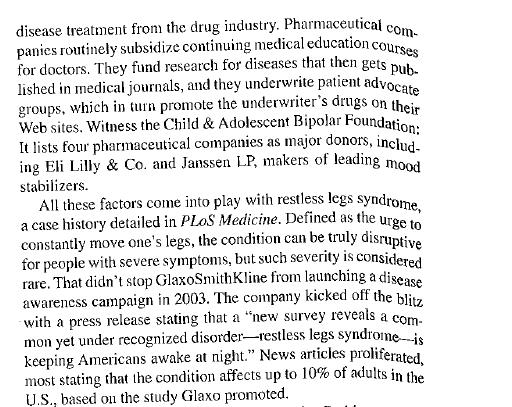 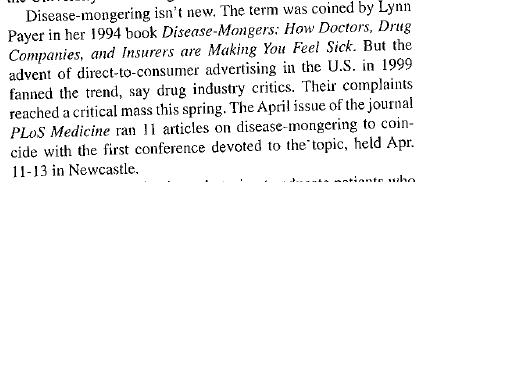 How to deal with deceit and dishonesty in people who have power over you?

"Gaslighting exploits weaknesses in the human mind and has a debilitating effect on the victim's ability to think rationally and to function independently of the gaslighter. It can take many forms. In all instances, however, it involves the clever manipulation of 'reality' by the predator that undermines the victim's independent mental functioning for the gaslighter's own political, financial, or psychological motives."

One of the more difficult things for me to deal with as a psychotherapist is to sit in the counseling room and watch a spouse swear up and down that he/she is not having an affair, being unfaithful, and lying when it fact there is proof positive evidence that the spouse is having an affair and is lying about it. Sometimes I watch parents tell their children that things are one way when they are in fact another and they are wanting the child's cooperation, compliance, and loyalty. I have worked in organizations when supervisory personnel only told employees what was going on on a "need to know basis" to maintain control over the workforce which might otherwise object to the company's operational procedures.

When politicians lie to their constituents, there is a break down in democracy because constituents can no longer play an authentic role in the life of their community, state, and nation. They are kept blind to what the real agendas are and why things are happening in their name which do not have their agreement and assent. Lying, saying one thing and doing another, creating a charade to project one reality when something else is going on, is a crazy making experience.

It is cause for great concern that the reality projected to the American people has been distorted for political purposes. It has made us all anxious, depressed, confused, and dependent. This is good for the pharmaceutical industry but not good for our democracy.

There are some positive signs with fake news shows like The Daily Show and Colbert Report which daily poke fun at the hypocrisy, duplicity, and inanity which passes these days for leadership. There are the Scott McClellan's whose conscience would no longer allow him to not speak up and openly admit to the deceit. This is hardly news because we all knew it all along, but to have an administrative official publicly admit it, is the first step in recovery.

The ability to recognize gaslighting is a higher level skill. Not all Americans are emotionally capable of reflecting on their own experience, and observing this communication dynamic. Back in the 60s we called gaslighting a "mind fuck" which means that we knew we were being fucked with. Gaslighting works best, of course, when it is so subtle that it cannot be observed, when it is not noticed. The national therapeutic effort is to help people recognize gaslighting and hold the gaslighters accountable. Individually, in our families, our communities, and our nation we would be much better off psychologically, socially, and politically.

This will require a level of literacy never before achieved in a society. And more than just literacy, it will require a level of emotional intelligence never before achieved as well. The major question which needs answering is how to manage deceit and dishonesty in people who have power over you? The answer is very carefully. I will write more about this in the next few days.

Cindy and John McCain have an interesting marriage. Cindy tells Jay Leno that she learned to fly an airplane and kept it secret from John, and the two of them lied to each other about their ages, she saying she was 4 years older than she was, and he saying he was 4 years younger than he was. She said they never found out the truth about each others ages until they had to apply for their marriage license and give their correct ages. She also says she became addicted to pain killers after back surgery and John never suspected a thing, but her parents noticed that she had a problem. It sounds like they are skilled at gaslighting each other. If John has trouble with truthfulness in his marriage how can he be honest as leader of the free world? Expect the gaslighting to continue whenever it's to his advantage.

McClellan is finally getting it right about how the Bush administration has gotten it wrong. Illuminating the gaslighting being perpetrated against the American people

Former Press Secretary Scott McClellan now thinks telling the truth is important even though Republicans suggest he is disloyal and should have taken the lies to his grave. Really. They really suggest this. Watch the associated press video which lasts 1:50 seconds.

In some ways this is good therapy. It is time, in the United States for the truth. The gaslighting which has been going on for 7 years is finally being exposed. Do Americans have the stomach for the truth or do they still want to be lied to? I sure hope they have the courage to face up to the truth. These hearings are a form of national psychotherapy which is good for the national soul.

Bush is funny but the American people are not - We elected him and the joke is on us.

It is hard to believe that this passes for leadership. The interesting thing is that Americans think he is funny and his malaprops and confusion seem to be endearing. It is scary to think this man's finger is on the nuclear bomb button and he was entrusted with the authority by our congress to send our nation into an illegal, immoral, and disastrous war.

We as a nation, need to face up to the healthy shame most of us feel because we were gullible enough to elect this man to lead us. While he is funny, we elected him, and the joke is on us. Not many people around the world find our stupidity amusing, and we must do better in the next election in 2008. Are Americans up to the challenge of righting the wrongs of the last 8 years or will we be hoodwinked again by the gaslighting techniques of the politicians, the religious quacks, and media wonks?

Rumsfeld's gaslighting led us to the Twilight Zone

Gaslighting leads the gaslighter and the gaslighted into psychosis otherwise known as the Twilight Zone. Donald Rumsfeld needs his meds and its a understandable why America has become a nation dependent on psychotropic drugs with leaders like this. Video lasts 1:38

"Gaslighting is the deliberate attempt to mislead people into thinking things are one way when are really another with the effect that the gaslighted person or people start to feel crazy and doubt their own mind."

Here is a great example of President George W. Bush gaslighting a British journalist. Laura Bush's expression as she listens to her husband's baloney is priceless. Video lasts 1:32