1st woman: "My husband tells me I'm an idiot. That's why no one likes me."

Posted at 09:14 AM in Marriage and family, Mental Health, Overheard in Rochester Area | Permalink | Comments (0)

Overheard In The Rochester Area - Feast or Famine

1st woman: “I’ve never told this to anyone before, but when we were kids growing up we never had enough to eat, and now I am over 300 lbs. And my cabinets and freezer are so stocked with food I can’t stuff any more in them.”

2nd woman: “I read this article and they called that food insecurity”.

2nd woman: “Yea, it’s like feast or famine. You eat a lot when food is available to store up fat so you can survive when food is not available.”

2nd woman: “But if the famine never comes the obesity will kill you.”

1st woman: “I know” and she started to cry

Overheard at the library

Man in his 40s: "Did you see the latest survey that 43% of Americans still think that Saddam Hussein was personally involved in 9/11?"

Second man about same age: "It's hard to believe that so many people are so stupid."

Overheard in Rochester Area - You don't make love with your kids

Overheard in a coffee shop.

First woman in her 60s: "Life looks so bleak. There's no life for me after him."

Second woman: "You still have your kids."

Second woman: "No, you don't make love with your kids."

Posted at 07:42 AM in Marriage and family, Overheard in Rochester Area | Permalink | Comments (0)

Overheard in the Rochester Area - The title requires curatives

Overheard in a lawyer's office regarding a real estate transaction:

Paralegal: "The title on this property requires curatives."

Paralegal: "The title will need some curatives."

Paralegal: "Well, there must be some easement or right away or something."

Attorney: "There is a cloud on the title."

Client: "Why mix the metaphors? First we have 'curatives' which make me think the title is sick and that's a medical metaphor, and then we have 'clouds' on the title which is meteorlogical metaphor.

Client: "It sounds to me like this whole business with curatives for the title which is sick is getting stormy because of the clouds. The stormy weather is making me sick."

Overheard in Rochester Area - The Whole World Is My Classroom

Nice lady in the mall: "You're very handsome. How old are you?"

Nice lady: "Are you in school yet?"

Grandson: "I could be in Kindergarten, but my parents homeschool me."

Grandson: "Yes, the whole world is my class room." 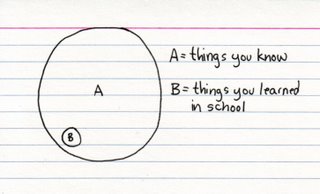 Overheard on a bus.

First teenager: "I have strange dreams about people getting their throats cut. I don't know what they mean."

Second teenager: "They sound like nightmares. Do they upset you?"

First teenager: "Not really. They confuse me more than anything."

Second teenager: "Your father threatened to kill your mother didn't he?"

First teenager: "Do you think that's it?"

First woman: “I talked to him about taking responsibility and telling his father he is sorry and asking how he can make it up to him.”

Second woman:” What did he say?”

First woman: “He said he was scared.”

Second woman: “Scare'd of what?

First woman “Scared his father wouldn’t love him any more I guess.”

Second woman: “Is he right, that his father wouldn’t love him any more?”

First woman: “Ya never know. His father can be a real idiot sometimes.”

Second woman: “Isn’t that what we all want, to be understood and loved?”

First woman: “I guess and when we don’t get it we shut down and terrible things start to happen for us.”

First woman: “Without love and understanding we hate life and become destructive each in our own way. My son will take up drinking and drugging just like my dad and will leave a whole bunch of wreakage in his wake like me.”

First woman: “Not according to him.”

First woman: “And I married one and now have a son who is one.”

First woman: “Take responsibility and know who you are.”

Second woman: “Response – ability. Sounds like you are able to make some better responses.”

Second woman: “What were you trying to teach your son?”

First man: "She told me I've got to change."

First man: "Yeah. Walk away. It don't cost me anything and no side effects."

Posted at 08:15 AM in Medications, Mental Health, Overheard in Rochester Area | Permalink | Comments (0)

Person upset and thinking that they were not being treated fairly when there probably was good reason for the treatment they received: "This relative was trying to explain to me that I shouldn't take it personally because it probably was just an insight."

Given the context, the speaker meant  to say "It probably was just an oversight ".

But then again, maybe it was an insight on the part of the person who committed the oversight which lead them to the way they handled the situation in the first place.