Taxi to the Dark Side, the film

Taxi To The Dark Side won the 2008 Oscar for best documentary. It is the story of Dilawar, the Afghani taxi driver, who was tortured and killed by U.S. soldiers. The film traces the history of the torture policy, illegal, and against the Geneva Conventions framed by Alberto Gonzales, Attorney General, John Yoo, Defense Department Attorney, Donald Rumsfeld, Dick Cheney, and George Bush.

It makes me ashamed to be an American. This current administration has committed terrrible sins and crimes against humanity in our name. As a nation we need to repent, ask for forgiveness, and make amends for our crimes and sins.

Every American should watch this film. It will help you understand why the terrorism threat has gotten worse not better in the last 8 years. I highly recommend it.

What kind of a nation have we become under the Republican Bush Administration? A nation that violates the Geneva Conventions by engaging in torture, extraordinary rendition, eliminating the right of Habeas Corpus, and engaging in the unconstitutional activity of surveillance on its citizens suspending their rights to privacy.

It appears that Osama bin Laden is winning as the United States suspends the civil liberties of its citizens and decreases their freedoms, engages in behavior alienating other countries around the world, and increasingly becoming a Christian Nationalist Fascist State.

Fortunately, some brave citizens are standing up for freedom even as they are being branded traitors and criminals by the current administration. On January 11, 2008 there was a demonstration in Washington, DC against torture which was either not reported or underreported in the news because the corporate media supports the current administration because war is good for business. Here is a brief snippet from the Witness Against Torture web site:

January 11, 2008 – Early this afternoon, 80 activists organized by Witness Against Torture delivered a message to the U.S. Supreme Court demanding the shut-down of the U.S. prison at Guantánamo and justice for those detained there. About 40 activists were arrested inside the Court building and another 40 on the steps. The arrests followed a solemn march from the National Mall of 400 persons that included a procession of activists dressed like the Guantánamo prisoners in orange jumpsuits and black hoods – part of an International Day of Action that was endorsed by over 100 groups and that included 83 events around the world.

Where does your favorite Presidential candidate stand on protecting our constitutional rights, our civil liberties, human rights around the world, and the use of torture and pre-emptive war? Hillary's record is not good. McCain's record is not good. The best Democratic candidates on these issues are Obama, Edwards, Kucinich. The best Republican candidate on these issues is Ron Paul. Watch them all closely and discuss these concerns with your friends and neighbors. We can be a far better country than we have been, and it will require new leadership and new values than what we have been subjected to the last 8 years.

Link: Witness Against Torture | campaign to shut down Guantánamo.

While President Bush and his administration disingenuously tell the American people that the terrorists hate Americans for their freedoms, very few Americans know about the Universal Declaration of Human Rights which was agreed to and promulgated by the United Nations General Assembly on December 10, 1948.

This year is the 60th anniversary celebration of this declaration.

There are many web sites devoted to the Declaration and a good place to start is the article on Wikipedia.

It seems hypocritical for the Bush administration to be talking about freedom when this administration has engaged in war crimes perpetrating a pre-emptive and immoral war on false pretenses, engaged in torture against the principles of the Geneva Convention, thrown out Habeas Corpus, engaged in illegal surveillance activities on its own citizens, utilized extraordinary rendition, refused to participate in the International Court, the Kyoto treaty, and the list goes on.

It would be a positive step forward if the next President and his or her administration fully supported Universal Human Rights. Do you know where your favored candidate stands on this topic?

The Shock Doctrine by Alfonso Cuarón and Naomi Klein

There is a brief movie, about 7 minutes, on YouTube giving an overview of Naomi Klein's book, The Shock Doctrine made by Alfonso Cuaron the director of Children Of Men. I recommend it. To watch it on the YouTube web site click on the link below.

Crooks and Liars web site on March 17, 2007, posted a clip from Bill Maher's show, Real Time, which aired on March 16, 2007 on HBO. It is well worth watching. He deals with our loss of civil rights under the Bush Administration.

Maher: And finally, new rule: liberals must stop saying President Bush hasn't asked Americans to sacrifice for the War on Terror. On the contrary, he's asked us to sacrifice something enormous: Our civil rights.

So when it comes to sacrifice, don't kid yourself–you *have* given up a lot! You've given up faith in your government's honesty, the good will of people overseas, and 6/10 of the Bill of Rights. Here's what you've sacrificed: search and seizure, warrents, self incrimination, trial by jury, cruel and unusual punishment. Here's what you have left: handguns, religion, and they can't make you quarter a British soldier.

I am starting a new category on my blog with this post which I am calling "Either laugh or cry" which will deal with political satire. It seems that the level of civil discourse has degenerated to the state of disinformation and argumentum ad hominem so that no reasonable conversation can occur and the only appropriate response is mockery and satire.

Bill Maher's clip is well worth watching. To access the Crooks and Liars web site where it is located, click on the link below.

In the upcoming election please vote for candidates who do not support torture.

Where are the Christians as the torture bill sailed through congress last week? David Gushee had a great article in the February, 2006 issue of Christianity Today in which he discusses 5 reasons torture is always wrong. Makes you wonder whether President Bush and the other Republican legislators who pander to the religious right really understand the Christian faith and its basic principles of nonviolence? Makes you wonder even further about the so called evangelical Christian leaders like Falwell, Roberston, Dobson, etc. who fall all over themselves about sexual issues which Jesus said very little about, but are nowhere to be heard on issues dealing with poverty, torture, militarism, and the relationship of The Kingdom to governement which Jesus had quite a bit to say which they pretty much ignore.

For more on this topic, see Austin Cline's article on October 1, 2006 on his blog, Jesus' General, entitled : "Exchanging chains for liberty: We must abandon the old standards and create new lines between good and evil." 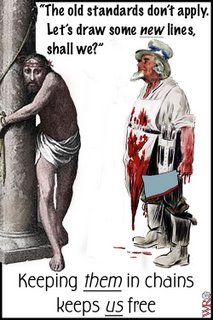 Read Gushee's article. It is well worth it. You can access it by clicking on the link below.

Who would Jesus waterboard? 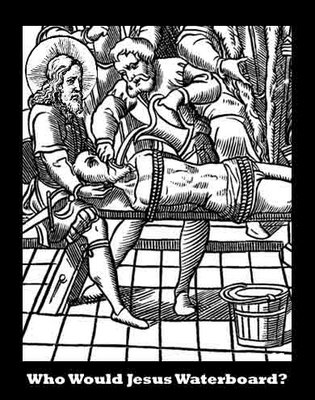 Is President Bush lying to us about torture?

On July 5, 2006 The National Radio Project's program, Making Contact, released its latest show, "The War On Torture: U.S. Policy exposed. Most of the 30 minute show is an overview of the law and policy that the Bush Administration uses to justify it's current policies on torture presented by Dr. David Luban, a professor of Law and Philosophy at Georgetown University in Washington, DC. Here is the brief description of the show from the National Radio Project's web site.

Images of bloodied, naked and shackled men.. some stacked like cordwood on a cement floor... some hooded, standing on boxes with wires attached to their fingers. These are just some of the lasting images of detainees held by U.S. forces in Iraq's Abu Ghraib prison. The reports of suicides and hunger strikes by prisoners at Guantanamo Bay further remind us that a policy of torture, through deprivation and isolation, remains.

On this edition, is the U.S. practicing inexcusable torture or are these instances of overzealous intelligence gathering by a nation at war?

The policies which the Bush Administration have pursued regarding torture has made the United States a pariah around the world and has seriously tarnished the view of America as a civilized country which follows the rule of law.

This is a very important show and I encourage people to click on the link below and take the 30 minutes to listen to it.