UU A Way Of Life has moved back to Blogger.

Unitarian Universalism: A Way Of Life has moved back to Blogger and can be reached at www.uuawayoflife.org. You can reach it by clicking here.

Spirirtual reading discussion group - Maturity: The Responsibility For Being Oneself - Chapter Two - Ignorance or innocence? 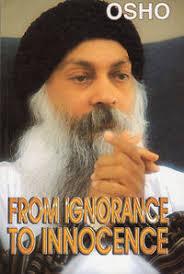 For growing up, just watch a tree. As the tree grows up its roots are growing down, deeper. There is a balance—the higher the tree goes the deeper the roots will go. You cannot have a tree one hundred and fifty feet high with small roots; they could not support such a huge tree. Maturity means the same as innocence, only with one difference: it is innocence reclaimed, it is innocence recaptured.

In life, growing up means growing deep within yourself—that’s where your roots are.

To me, the first principle of life is meditation. Everything else comes second. And childhood is the best time. As you grow older it means you are coming closer to death, and it becomes more and more difficult to go into meditation.

But unfortunately his innocence is condemned as ignorance. Ignorance and innocence have a similarity, but they are not the same. Ignorance is also a state of not knowing, just as innocence is—but there is a great difference too, which has been overlooked by the whole of humanity up to now. Innocence is not knowledgeable, but it is not desirous of being knowledgeable either. It is utterly content, fulfilled.

A small child has no ambitions, he has no desires. He is so absorbed in the moment—a bird on the wing catches his eye so totally; a butterfly, its beautiful colors, and he is enchanted; the rainbow in the sky … and he cannot conceive that there can be anything more significant, richer than this rainbow. And the night full of stars, stars beyond stars …

Osho. Maturity: The Responsibility of Being Oneself (Osho Insights for a New Way of Living) . St. Martin's Press. Kindle Edition.

This is a second article in a series on Maturity: The Responsibility of Being Oneself by Osho.